Six months after moving to Sweden an event occurred that was so extraordinary it would change my life forever.

One day around the end of October near Halloween in 2017 I got a chance to visit a couple friends in London that I met at a tech conference. This was almost exactly two years ago from the date I write this.

I scheduled the flight to London, got confirmation from the friend, and the day before I was to fly the friend informed me he had forgotten I was coming and I would need to find somewhere else to stay. My friend Mari suggested I still go and make the best of things. So I packed up my backpack and left without a place to stay.

Upon arrival in London, I contacted a different friend Lisa and she agreed to meet for beers. She said the friend who was supposed to host me was an ass and that I could stay with her for at least the first night but she was pretty busy. Not wanting to impose for too many nights, I booked an AirBnB for the second night.

As scheduled, that second night I went to the AirBnB. The building was difficult to find, built in the 1600s and nestled behind its neighbors with a number panel not easily seen from the street. It was three stories tall and owned by a woman who greeted me and informed me that her children had moved out and now she rented the rooms to guests to make money. Because she had several guests, she explained the sole bathroom would be busy so I needed to be mindful of time. She also introduced me to one of her tenants named Rick who was working in the living room next to the bathroom and asked politely for me not to bother him. Rick was busy working on editing an international film for a United Nations project about women in STEM in Africa. I agreed to be quiet and he went back to his video editing.

The following morning, I got up and went downstairs to take a shower. The owner handed me some towels. While in the shower with the water running, I heard her voice outside the door saying “excuse me, sir?” Figuring she must have forgotten something, I responded quickly asking what she needed. No response. She must have made a mistake and left.

The next day I had a halloween party with my friend Lisa. After the party Lisa agreed that I could stay at her place and I was secretly hoping I could save money and not have to book anymore AirBnB stays for the entire weekend. On Sunday, however, she informs me that she had a ton of work to do since she was starting her new recruiting business on Monday morning. So Lisa kindly asked me to go back to the AirBnB so she could focus. Annoyed, I checked if the same AirBnB was available and booked it last minute and then immediately headed over.

The next day I had an important interview with my dream company, Spotify, so I wanted to be prepared early. While in the shower, I heard the same voice again saying “Excuse me, sir?” This is bordering on annoyance. Why does this woman only seem to bother me when I am in the shower. So again I responded with “Hello, who is it, what do you need?” No response. So I turned off the shower water, thinking that perhaps the running water was too loud. “Hello?” No response. What was wrong with this woman.

As I left the bathroom, Rick looked up from his laptop in the living room and asked:

“Josh, who were you talking to in there?”

“Oh the owner walked by and must have wanted in for something.”

“Josh, we are the only two people in the apartment right now.”

“There was nobody there, I was here the entire time you were in the shower. The owner has not been here for quite some time.”

It was true, he was sitting at his computer, easily within eyesight of the bathroom door, which was why he looked up to talk to me when I exited. Unfazed, I said that maybe I had actually heard something else rather than a person’s voice. Then he informed me that he heard something too, but it wasn’t a voice. It was a sound like a puff of wind. I asked where he heard it, and he said it was about head-height in front of the bathroom door - on the outside. He said he just thought it was weird until I responded to it. Then he heard me turn the shower water off and I responded again and then knew that it was more than just a puff of wind.

Then he asked me the strangest question:

“Josh, are you religious by any chance?”

This suggestion made me upset. He explained that he was “Episcopalian, it is like Catholic-lite.” I had left the United States to get away from religious nuts, and here at some random AirBnB I am face-to-face with one. This was my area of expertise! I had trained my whole life for this moment. I could prove to him he had gone too far. All I needed to do was to find the source of the “voice”, which I had obviously misinterpreted, and make the same sound again.

For the next forty-five minutes I did everything I possibly could to try and recreate the sound, or anything even remotely like it. I checked the walls, which were solid stones from the late middle-ages. We checked the sound of all doors opening and closing. I checked for any speakers, pipes, wiring, or anything else. The house was very old and most electrical and piping was exposed, but none of it was near the source of the voice. We both identified the source of the voice/sound to be the same location, but we both heard different things. He heard a “whooshing” sound, like a puff of air, but I heard a female voice. Not giving up easily, I turned on the shower at the exact temperature I had used it (the knob was still set to where I had it), closed the bathroom door, and waited for 20 minutes. My theory was that a pressure differential had built up and there was a release of steam. No matter what I tried, there was no way to explain what happened and we never heard anything.

Rick mentioned that he was friends with the owners of the house and came there often to get away and focus on his work since he regularly travels all over the world and is quite busy. He had showered in that room dozens of times and had never heard anything like what just happened.

Somehow I heard the same female voice twice, on two separate days booked independently of each other, in the same house, and the second time there was an external witness to the event who just happened to be an Episcopalian Christian. The only reasonable explanation was that someone played a prank on me both days, and the only person who seemed capable of it was Rick. But here he was legitimately concerned that something spiritual happened. I was stumped.

It is worth noting at this point that what happened did not fit any worldview I could possibly imagine. It was so highly strange even for someone raised in the protestant church. In most Christian denominations, a “haunting” is considered a demonic appearance. But in this case, Rick was an Episcopalian who did not even mention demons, he just seemed to think something strange was happening. I could not think of a single theological reason why a female ghost in a house in London was politely and gently saying “Excuse me, sir?” while I showered. The experience contradicted every piece of information I had about the human psyche, human evolution, sound waves (I had studied audio engineering for a previous job in artificial intelligence and even have open-source projects available online in FFT, DFT, and MFCC), and was the only time in my life that I had heard a voice that did not exist. And someone else also heard it. And nobody was there. My brain broke.

While we chatted in the living room, the landlord came back through the front door with groceries in her hands. She was surprised that we were deep in conversation and asked how we were doing. We explained what happened and her response was:

“Oh, the house is haunted, that stuff happens all the time. Many guests have seen a woman who does not live here, but nobody has ever said they heard a voice.”

Below is a layout of the house, as drawn by me, to try and figure out where the voice could have come from: 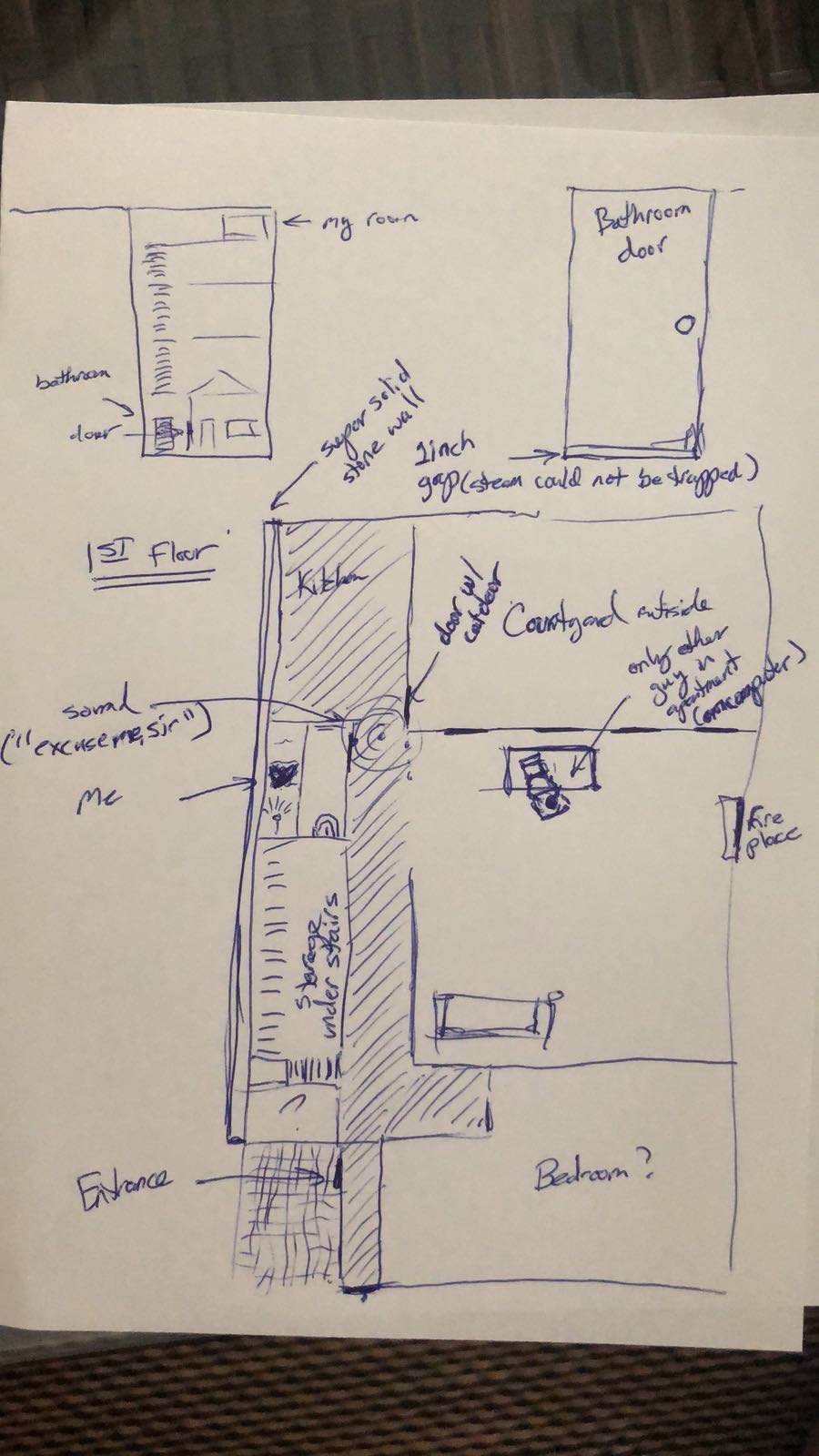 Previous
Reasoning my Way to Atheism
Next
Best to Worst to "Born Again"
Comments
No comments yet. Be the first to comment!